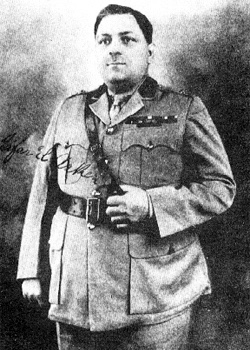 We have history that can make a thousand epic stories and movies.

Fought against the British in Libya along side the Sanussi tribesmen.

In a desperate battle, he resorted to his sword to continue fighting.

Fallen as a prisoner of war to the British in 1916.

Tried to escape and broke his leg.

Approached by Nuri Al-Sa’id (Iraq) and Dr. Abd Al rahman Al Shabandar and briefed on Arab secret societies of Alahd and Alfatat, and the Arab Revolt.

Communication blocked by the British.

British were hesitant about him joining Arab Revolt with Sherif Hussein because they don’t want the Arab Revolt to be too strong or too PanArabic, but as need arose for commanders, he was a natural choice.

Sharif Hussein was suspicious of such a previously Ottoman loyal warrior to join the Arab Revolt, but his son Faisal insisted and convinced his father.

Faisal wrote him directly and invited him to be the commander of the Arab Revolt Northern Army which is led previously by Faisal himself.

Fought till the victory of the Arab Revolt and the fall of the Ottoman Empire in 1918.

Amir Zaid, on behalf of Amir Faisal, asked him to be the Inspector General of the Army of the newly established Arab state of Syria, which he accepted. Shortly thereafter, he was appointed the military Governor of the Aleppo Vilayet in Syria.

In 1921, appointed as Minister of Defense in Newly formed Iraq by King Faisal.

In 1923, appointed as Prime Minister in Iraq.

After couple years, he resigned as he didn’t like the job and was appointed as Iraq minister in London.

In 1926, appointed as Prime Minister again, but resigned in December 1927 since his plan was not liked by people.

Assassinated in 1936 as part of Bakr Sidqi military coupe.

It is Jafar Pasha Al-Askari.